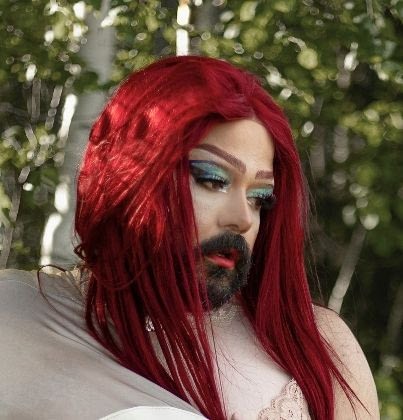 Frida Marida is a Lebanese drag artist and speaker living in Oslo.

Introducing oriental music, which is Frida´s strength, into famous international songs is the main esthetic direction of Frida´s Art while dealing with discrimination, racism and many other social issues.

Frida Marida is the superhero who saved the person behind from a lethal, severe and chronic depression.

Frida’s story is a lesson to share about body shaming, feeling inferior, emotional abuse and inequality.

By performing her own interpretation of famous international songs, Frida shares her stories and transforms them into useful real-life examples to solve her and others’ problems.

her latest record is composed of 11 different languages. During the Oslo pride, with a band of 9 musicians of Norwegian and middle eastern background, Frida performed in English, Norwegian, Arabic, French, Spanish, Portuguese, Hebrew, Farsi, Greek, Italian and Turkish. Frida has performed at Oslo Pride, Drammen Pride, Munch Musuem, Jakob Kirke and others. Her latest performance `FAT` appeared in Pride 2021 was support by the Canadian and French embassy, Nordic black theater, Skeiv Verden, 657 Oslo and others

Hani Assaf, the mind and body behind Frida, is a Lebanese audiovisual director, holding a master degree in TV direction. He moved to Norway in May 2017, the year when he met Frida after one of his deepest depression waves, emotional and physical abuse, suicidal thoughts and traumas of Norwegian authorities and bureaucratic procedures.

Hani Assaf has been working as freelancer TV director, creative and Art director, song maker, makeup artist and producer for many TV channels and production houses in Lebanon, Saudi Arabia and Dubai.

“Frida came to sum-up my potentials and finally make me aware of my own and real identity, Frida is the one and only platform that can accept, understand and appreciate all my different artistic creations and forms, with no limits or fear. I could have missed to succeed in all the titles mentioned above because i was failing to be myself, once I achieved that… I triumphed all the others” Hani Assaf